Syntactic Variation of Catalan and Spanish 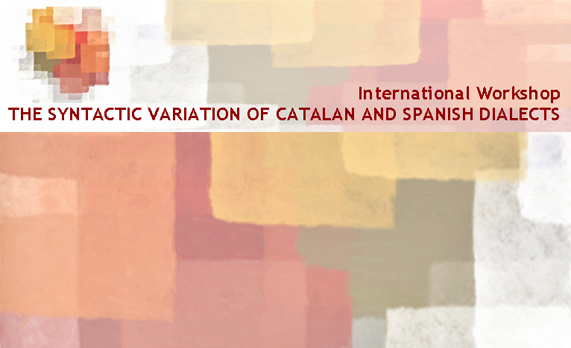 International Workshop: ‘The Syntactic Variation of Catalan and Spanish Dialects’

Organitzadors: Ángel J. Gallego, M. Lluïsa Hernanz, Francesc Roca, Avel·lina Suñer
Even though Catalan and Spanish have been the focus of much theoretical and empirical research within the generative framework, most attention has been paid to specific phenomena (clitics, doubling, verb movement, subjunctive, agreement, differential object marking, etc.) or specific cross-linguistic contrasts (English-Spanish, French-Spanish, Italian-Spanish, Catalan-Spanish, etc.). These and other factors made it difficult to construct comprehensive dialectal route-maps of these languages. Even in recent large-scale descriptive surveys (cf. Bosque & Demonte 1999, RAE-ASALE 2009, 2011, Solà et al. 2002), the role of dialectal varieties of Catalan and Spanish has not been at the forefront of formal studies.
As is well-known, the interest in finding out what the relevant varieties of Catalan and Spanish are has typically focused on the domains of lexicology, morphology, and phonology, where much descriptive work has been done since the late 19th and early 20th centuries. In the domain of syntax, however, little work can be found, a singularity that is reflected in the availability of few major studies of variation of Catalan and Spanish dialects (cf. Kany 1945, Veny 1978). This situation is unexpected, given the recent meticulous work on syntactic variation in other Romance languages (most notably, Italian; cf. D’Alessandro et al. 2010 and references therein).
Ever since the fifties, syntactic theory has developed and put in practice methods and tools to complement previous structuralist comparative work (atlases, corpora, etc.), making it possible to approach dialectal variation in a comprehensive and fine-grained fashion. The methods and tools have the generative framework as a source (Chomsky 1965, 1981, and subsequent work), and this source has proved useful in characterizing several languages and establishing points of uniformity (principles / universals) and points of variation (i.e., parameters). Given the availability of these tools and the ever-present interest in studying the variation/uniformity tension, there is no reason why studies on syntactic variation should not become an important focus of research. This has been complemented and backed up with a growing interest and concern in the area of generative grammar, including more careful and detailed comparative studies, paying much attention to language internal (dialectal) variation. Both viewpoints can be said to naturally stem from the Principles & Parameters framework of the early eighties, which gave rise to the key notion of ‘parameter,’ which has been investigated from both MACRO and MICRO perspectives (Baker 1996, 2001, 2008, Biberauer 2008, Biberauer et al. 2010, Cinque & Kayne 2005, Kayne 2000, 2005, among many others).
The present workshop aims at stimulating the study of the syntactic phenomena of Catalan and Spanish that show variation, hoping that it will help set the stage for subsequent investigations on the syntactic variation of these languages, deepen its relationship with other Romance cognates, and improve our understanding of the faculty of language.
The workshop will take place at the Universitat Autònoma de Barcelona (Bellaterra, Barcelona), in June 26-28, 2013.