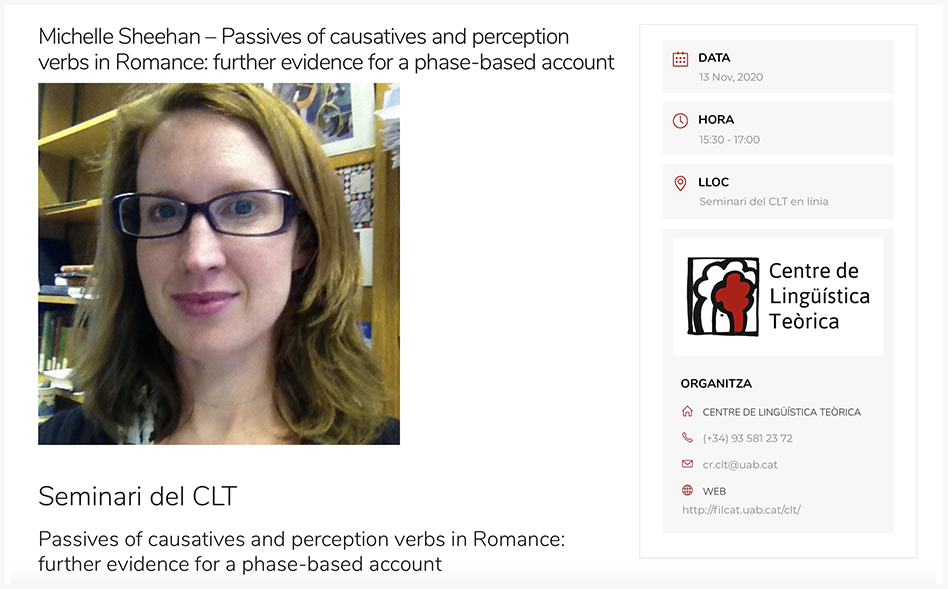 In this talk, I examine this area of rich grammatical variation in Romance languages and extend the phase-based analysis developed by Sheehan & Cyrino (2018) for English and Brazilian Portuguese to European Portuguese, Italian and especially dialects of Spanish. The general claim I make is that (long) passives of causative and perception verbs are blocked because of Chomsky’s (2001) Phase Impenetrability Condition wherever A-movement needs to cross two phase heads. This kind of approach can handle the fact that passives of causatives are usually banned but not always. Consider English, in which bare verbal complements block passivisation unlike to infinitives (Higginbotham 1983):

Sheehan & Cyrino (2018) argue that this is because to has an EPP feature which feeds successive cyclic A-movement in English. The patterns attested across Romance languages are different. In Brazilian Portuguese, some verbs permit passivisation (mandar/deixar) whereas others do not (fazer/ver/ouvir). In European Portuguese, passivisation is possible only with prepositional infinitival complements (Hornstein, Martins & Nunes 2008). In Spanish and Italian whether passivisation is permitted is sensitive to the thematic tole of the embedded argument: only internal arguments can ever undergo long passivisation (see Treviño 1993, citing Cano Aguilar 1977, Torrego 1998, 2010, Tubino-Blanco 2010, 2011 and Folli & Harley 2007). I show that all of these patterns fall out from the phase-based model because of the varying size of the complements of these verbs. In all cases, embedding of a phasal complement blocks passivisation.